skip to main | skip to sidebar

What Can a Registered Dietitian (RD) Do For Me?

Here is a video from the Academy of Nutrition and Dietetics that shows how a dietitian can help you with all your nutrition needs, from sorting through all the confusing information on diets to helping you manage chronic diseases like diabetes.
Contact me and I'll help you find an RD in your area so you can get started on the journey to good health!
Posted by LAURIE BEEBE at 8:55 AM No comments:

Cooking and Baking Measurements and Equivalents -- A Pictorial Tutorial

If you aren't a regular when it comes to food preparation, the amounts and measurements can be quite confusing. But it's important to know how many teaspoons are in a tablespoon if you've lost your cough-medicine measuring cup (!) or when you're trying to cut a recipe in half.

So here are some common household measurement and their equivalents:

There are 3 teaspoons in 1 tablespoon. This is true for liquid measures as well as powders, such as sugar, salt, flour and herbs and spices like parsley or cinnamon.

It's also helpful to know that teaspoon is commonly abbreviated as tsp or just a small "t" while tablespoon is often indicated by Tbsp or a capital "T".

One quarter cup has 4 T. If you wanted to cut a recipe in half and it called for 1/4 cup of brown sugar, you could measure 2T and it would be equivalent to half of the 1/4 cup (1/8 c measuring cups are not common and 2T will do just fine!)

Liquid items are most often measured in ounces. One cup of fluid is usually 8 ounces (measured by volume and not by weight. In other words, don't try weighing 8 ounces on a kitchen scale, just use the lines on the measuring cups. That's what they're there for!)

This conversion is helpful when you try reducing recipes to make half a batch of, say a pasta salad with dressing. If the recipe serves 8 and you want to make a batch with just 4 servings, you will want to halve the 1/4 cup of red-wine vinegar it calls for. Since many measuring cups do not have a 1/8 cup indicator (which is actually one ounce), knowing that 1/4 cup equals 2 ounces (and therefore 4 Tablespoons) your best bet would be to measure 2 Tablespoons of vinegar, instead of trying to guess what 1 ounce is with a standard 8-ounce measuring cup.

Ditto with the medicines that may call for 1/2-ounce dose for your child (which might be the green line on the plastic measuring cap, but what if you lost it?) Now you know one tablespoon will be the right amount to cure that headache without worrying about overdosing.

What about pints and quarts? Sometimes a recipe calls for a pint of buttermilk. How do you measure this when you have a rather large container of milk?
One pint = 2 cups  just measure 2 cups of the milk and you have your pint!

You should also know that 2 pints = 1 Quart

This means one quart = 4 cups 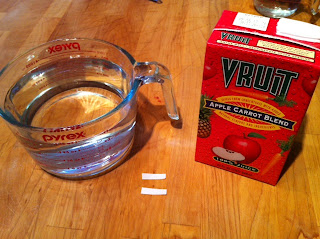 Pictured here is a 4-cup measuring cup, which is 32-ounces and is also equivalent to 2 pints as well as 1 quart. If you don't remember all that, look at the label where it tells you how many ounces are in the container.

You can clearly see that 32 ounces of juice are in this carton and that is the same as one quart (indicated on the label as 1QT). Sometimes pint is abbreviated as PT. 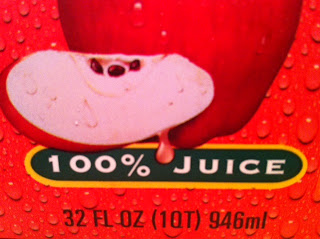 The milliliters (946 ml on this label) aren't used often in the US since that's part of the metric system. If you happen to find a recipe from the UK it will be helpful to know that 1 liter (they spell it litre over there!) is nearly the same as our quart. 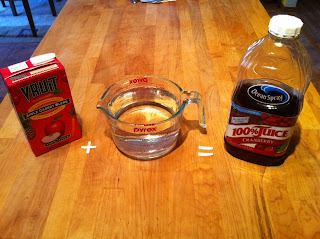 This photo on the left shows the relationship of 2 quarts to one-half gallon. You know there is a quart in the Vruit juice container (from the label close-up shown above) and there is a quart of water in the 4-cup measuring cup. Together they make 8 cups--also measured as 4 pints, or 2 quarts, or one half-gallon. If you look closely to a half-gallon label on a container of milk or juice it will often say "64 ounces". 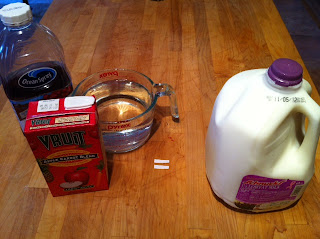 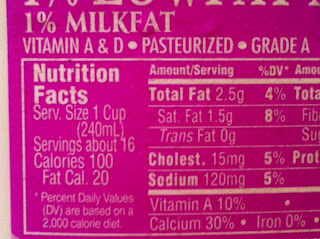 Remember to look on the label for helpful reminders. Here is a close-up of the milk label showing that one serving is 1 cup. On the next line you'll note how many servings are in the entire container, "about 16". So you can calculate that there are 16 cups in a gallon. It might be easier to do this in steps:

You Can Have Your Own Personal Diet Coach!

For individual, personalized attention, work with a diet coach who is also a registered dietitian! Find out how YOU can lose weight safely, permanently, and without dieting! Visit mycoachlaurie.com.

For Email Marketing you can trust

LAURIE BEEBE
I'm Laurie Beebe. A registered dietitian with a certificate in adult weight management. I'm here to provide a source of accurate nutrition information online. Ask me anything about nutrition and I'll find a good resource if it's not my expertise, and answer your question here!